TDF 50mm shred is produced through the Columbus McKinnon (CM) shredder (recognised as the premium tyre shredder on the market) producing a quality PAS 107:2012 product that is supplied to Cement Kilns.

The CM shredder is recognised as producing the best quality shred for industrial fuel applications.

The main shred product produced by CEL is a nominal 50mm tyre chip that is widely used as a fuel product, particularly by cement kilns (as a replacement for fossil fuels).   CEL has worked extensively with the major UK cement producers and currently has contracts with them to take the vast majority of CEL’s output.  CEL has also produced shred for applications overseas, both in Europe and in the Far East.  The shred that is produced meets the PAS 107 standards.

CEL can produce PAS 108 bales at the Wednesbury site. These bales are used in a variety of engineering and industrial applications.

The LMS Tyre baler is a high output baler capable of producing 4-6 PAS 108 tyre bales per hour, or processing over 500 car tyres per hour.  Car tyres are loaded manually into the baler. Operators will check that the tyres being loaded are within specification and are not contaminated with foreign objects. 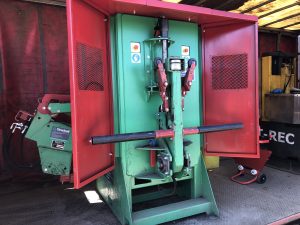 CEL has recently acquired the capability to process truck tyres on site, via the purchase of a tyrewall side cutter to remove the truck tyre beadwire.

The Gradeall Tyre Sidewall Cutter is a high-quality machine in the tyre recycling equipment range which has been designed for the purpose of providing a simple and safe solution to sidewall cutting.

The Gradeall Sidewall Cutter deals with a wide range of tyres from 15″ car tyre, up to large Truck Tyres and Agricultural Tractor Tyres